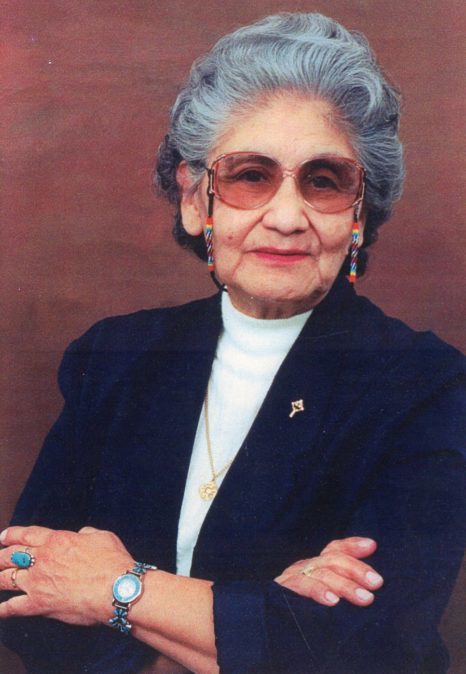 As I sat across from Rev. Dr. Lois Glory-Neal listening to her story, her earrings caught my eye. They were stunning Native American hand-beaded artistry in the shape of a cross. The colors were vibrant orange, red, yellow, and blue, and the chevron pattern sharp. Each bead had been meticulously placed to make it almost appear to be a solid piece. I could not think of a better metaphor for her life. The tradition of her Cherokee heritage forming the heart of Christianity was a perfect blend of her love of tribe and God and harkened to her service to Native populations and the church.

The first part of the interview was detailing life as a child, her role of mother to seven children and her partnership with her husband. The second part: her answer to her own call. She lived with her mother and grandparents while her dad served in the army for forty-three years and spent significant time away. Her grandfather, Joe Kingfisher, was a Baptist preacher and baptized her in the Illinois River at age twelve. She believes that she heard the whisper of her call in those waters but did not know the full details of what her ministry would look like.

She married her husband Oliver Neal, a native Chickasaw, who at the prompting of Bishop Angie Smith, helped organize and pastor the OIMC Mary Lee Clark Church in Oklahoma City. They served 12 churches in Oklahoma, including the Boiling Springs Chickasaw camp where they lived and served, before moving to Arizona and serving on the Fort Yuma Indian Reservation for four years. In 1975, Bishop Charles Golden asked Rev. Neal to consider planting a Native American Church in Los Angeles, California.

Rev. Neal describes her time in California with a sense of astonishment, pride, and gravity. “Oliver did the footwork for that church. Starting with a small space on 4th and Union in downtown LA and a few interested folks.” In two years, the church was fully chartered with over two-hundred members. Her voice was laced with a bit of awe as she detailed that this work was done while their five daughters were still quite young.

Rev. Neal spoke of her role during this time. She supported Oliver’s planting efforts, but her main focus was her children. “I guess this is unusual, but I did not know this until it was over. People would say, ‘You raised seven kids in the ministry…how?’” She said she did not know any different.

When her children were older and more self-sufficient, she realized, “I could tell you how to raise children in the ministry, but I did not know about the world and what was out there.” This is when she approached her husband about taking a course at the local community college. She felt the need to expand her understandings. Before she knew it, instead of being enrolled in a single course, she started with a full load as she could not choose what class to take. At the end of the semester, her husband and her children celebrated her perfect marks as they sat at the dinner table – the very table that used to be the center of her world.

Four years into their time in L.A., Oliver passed away suddenly. This not only ended her time in California, but it also marked the doorway for Rev. Neal’s ministry. She moved back to Oklahoma and felt the call to be ordained herself. This meant seeking her undergraduate degree as well as a Seminary education. At the age of 50, she enrolled in OCU with boldness and with the help of the OIMC and private donors. “I spent a lot of late nights until closing in the library. It was tough and I had to learn to study, new words, and my course work all at once.” She met the challenge and graduated in four years.

She showed the same grit during her time at Saint Paul; alongside her studies, she served in an OIMC church, Kahbeah Chapel, in Horton, Kansas. She graduated at the age of fifty-eight. However, this was the beginning of perhaps her biggest challenge – ordainment. She had no predecessor; she was the first Native American woman to receive full-membership as an Elder in the United Methodist Church. Her first appointment as Elder was on the Kickapoo/Potowatomi reservation. Four years later, she blazed another trail and became the first female Native American district superintendent.

As our time came to a close, Rev. Neal showed pictures and newspaper clippings about her ministry. I was taken back by one article that suggested she continued the ministry of her husband. Although the years spent with Rev. Oliver Neal influenced her journey, I believe she stepped and fully grew into her purpose and followed the path of her ministry. Thanks be to God for her boldness and witness.

Posted in Alums, Events, Where Are They Now?