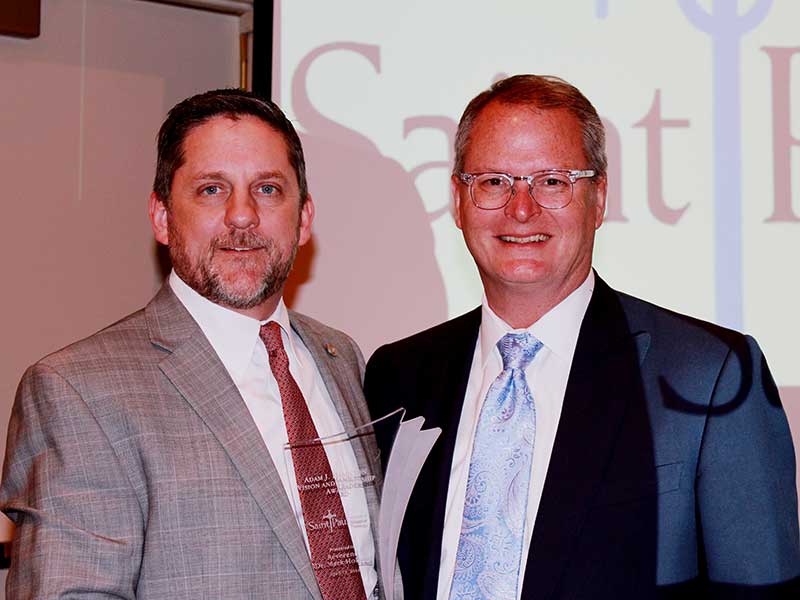 Rev. Mark R. Holland (DMin ’09) is the recipient of the first Adam Hamilton Award for Leadership and Vision. 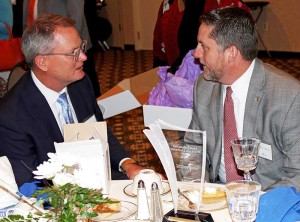 The award was announced at a celebratory dinner by the Saint Paul Board honoring Pastor Adam Hamilton for over twenty years of leadership on the Board. Acting President Nancy Howell then presented the award to Pastor Holland for his exemplary leadership as Senior Pastor at Trinity Community Church, a United Methodist Congregation in Kansas City, Kansas. It is one of the most multicultural United Methodist churches in the area.

Rev. Dr. Holland has a passion for God, for the church, and for the community. He is a powerful preacher, teacher, and pastor with a vision for a church that truly has Open Hearts, Open Minds, and Open Doors. In addition to his role as Senior Pastor, Dr. Holland serves the community as the 28th Mayor of Kansas City, Kansas and the 3rd Mayor/CEO of the Unified Government. 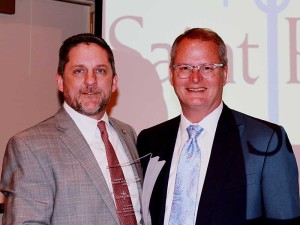 Holland focused his doctoral work at Saint Paul School of Theology on the concept of “holy conferencing” an early Methodist principle set forth by John Wesley, the founder of Methodism. Wesley believed that “holy conferencing” — Christians conferring together for the sake of peace and truth seeking — was a “means of grace.”

“Holy conferencing is essential to the structure and polity of our church,” Holland explained. “It is so important to our church that all essential decisions regarding bi-laws and elections are done in group conference settings.” Holland believes that collaborative theology is the theology of the church.

As a final project, he held a holy conference with the ten United Methodist Churches in KCK. They talked about how the churches could work best for the Wesleyan witness in Kansas City, Kansas. They spoke about ideas for change and collaborative opportunities.

After that meeting, Holland’s congregation decided to take that model of collaboration and own it. “We wanted to put community in the center of all that we do.” Soon they were hosting groups such as Head Start, Wyandotte Mental Health, and PACES program for at-risk youth. They also began collaborating with the Red Cross so that they are now the Designated Volunteer Report Center for natural disaster in Wyandotte County.

The church also cast a vision to be a multicultural congregation that reflects the diverse cultural, economic, political and cultural neighborhood where it resides. “Kansas City Kansas has no ethnic majority right now,” said Holland.

With a grant from the Kansas East Conference they in the process of creating a United Nations model where each service is interpreted into various languages and people can dial into the language that they need. “The spirit of our church is so strong. We have a great group of leaders who have helped us get these initiatives started,” he said.

While Mark finds collaborative ministry in church to be essential, he also realizes that the community can’t get anything done without it either. He cited many upcoming projects with one of the largest collaborative efforts in Kansas City Kansas being Healthy Communities Wyandotte. The initiative began as a response to the 2009 Kansas County Health Rankings report, which listed Wyandotte County as having the worst health in the state. Concerned that residents were dying too young and suffering from too many chronic diseases, civic leaders convened residents and representatives from more than 50 organizations and neighborhoods to brainstorm solutions. The countywide coalition aims to help Wyandotte become the most improved county for health in the state of Kansas. “Collaborative efforts like this are not only the right thing to do but they are essential,” said Mayor Holland.